The Economic Case For Bike Lanes

The case for and against installing more bicycle infrastructure in cities all over North America has been raging all over the media in recent years, with the fervor of arguments from both sides growing with every passing season.  On one side of the debate, lets call them "Pro-Bike", are of course bicycle advocates struggling to get safer places to cycle, forward thinking city planners, new urbanists, social justice groups, and health professionals - just to name a few.  On the other side of the debate, lets call them "The Status Quo" are car-centric transportation planners stuck in old paradigms, city politicians using outdated logic, the average Joe/Jane who has subconsciously bought into the idea of "The American Dream" with all of the trappings that come with that concept, and of course the auto-industrial-complex.

Those who are against more bicycle infrastructure on our public roadways love to portray the issue as some kind of "war on cars" or grand ideas of social engineering gone wrong when in fact the last 50+ years of suburban sprawl, subsidies to the oil/gas industry, and promotion of The American Dream is the real and dominant social engineering experiment we are living with today.

Sadly, the results of following this dream has led to an obesity and diabetes epidemic that is bilking our health system of billions of dollars, cities that are going broke because they cannot pay for the infrastructure upkeep associated with sprawl, and choked road networks that cannot handle all the suburban residents driving virtually everywhere for everything.

Our society is in deep shit and most people are clueless - or suffering from cognitive dissonance - to the implications barreling down the road at them.

All is not lost however, so long as we face these realities head on and start to make the changes.  One of the changes that needs to happen is to get citizens moving in our cities more efficiently - with bicycles playing a very important role.  Thankfully, there are many city planners, aldermen, and citizens who see the opportunity placed in front of us and are actively pushing to get more and better bicycling facilities here in Calgary.  We are fortunate to have a new cycling strategy passed and funded by city council for the next 3 years to the tune of $24 million.

Cities all over North America are creating safer cycling conditions through investments in bike lanes, car free events, and bike share programs.  All of these cities have seen dramatic increases in ridership following these investments and there is no reason why here in Calgary we won't see the same increases.

Here are a few links and news articles to get you thinking about this important issue.

If you support more bicycle facilities in Calgary it is very important that you make your views known to your Alderman and Mayor.  Take a few minutes and send them a note indicating that you support the cycle strategy and want to see it fully implemented.

Bicycling is an important component of the overall transportation network.  With safer places to cycle more people will choose cycling as a mode of transport.

If you like riding bikes, have a competitive streak, and enjoy urban environments, you may be interested in one of the most fun urban cycling activities available - bike polo!

Hardcourt bike polo has been experiencing amazing growth over the last few years all around the world and unbeknownst to most, Calgary has a thriving bike polo scene, with 2 main clubs - Calgary Bike Polo Society and Rogue Polo. 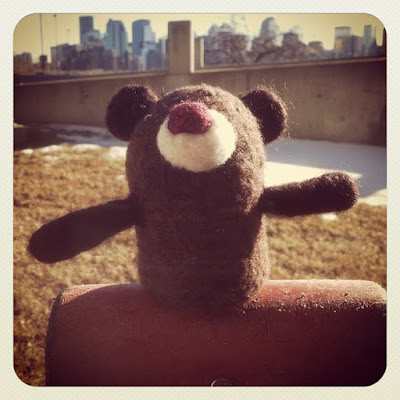 In the summer season Calgary Bike Polo has been playing for the last few years at Richmond Knobhill Community Rink on Wednesdays with Rogue Polo playing at Highwood Community Rink on Fridays and Saturdays. In the winter, when temperatures are reasonable and there isn't a show at the Jubilee Auditorium we have been playing on the lower level of the ACAD parking garage on Sunday afternoons. 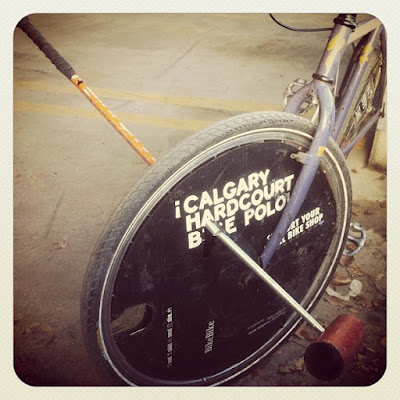 However, beware. Hardcourt bike polo can be addictive. Like speed? Check. Like big time laughs? It's got that too. Want to practice your bike handling? Yessiree. Looking for a full body workout? You betcha. 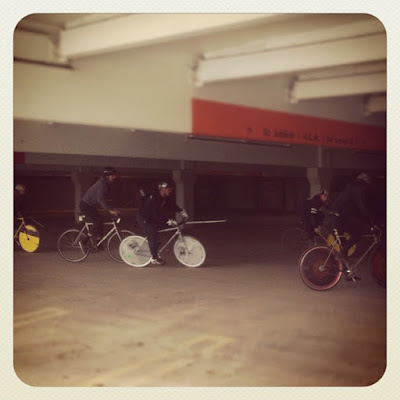 Like snowboarding, the learning curve can be steep and sometimes painful. Finding your balance on the bike while holding on with one hand, the other hand grasping your mallet, falls are commonplace during the first attempts. However for most people improvements in balance and braking come fast and before you know it you are dodging collisions and scoring goals - all the while also experiencing the exhilaration of riding so close to other players you literally are banging elbows and bikes.

New players are always welcome, all you need is a desire to try and a bike. See you out there someday?
- February 06, 2012 No comments: Links to this post

26 Months on Without a Car

After reading a post on Lovely Bicycle I was reminded that I too have been without a daily driver for over two years now - wow, has it really been that long?

One of the things that Velouria mentioned in her piece about not owning a car was her desire to not make her decision to be car free as some kind of "if I can do it so can you" narrative - it is simply a lifestyle choice that is easy for her.

However, for me, choosing to live a car free lifestyle was definitely influenced by a desire to lead by example -

1 - I was taking a huge pay cut quitting my job to open BikeBike and I wanted to make sure the business would have enough cash flow to get us through the critical first year so by ditching the car I would pull less wages out of the shop.

2 - Most importantly, I wanted to know what it would be like to live car free in a city known for being very spread out and populated by car loving people so I could better converse with my customers about the realities of daily bike commuting in "Los Angeles of the North".  Contrary to Velouria's position, I want to show people that if I can live without a car, so could you!

It has been an interesting ride to be sure.

I have written a trio of previous posts about this topic here and here and here and since the last post not much has really changed.  One thing I did decide was I needed to find a way to get out of the city more often as I was finding myself getting a little squirrelly and badly missing trips to the mountains for the usual fun found out there - mountain biking, snowboarding, hiking, and camping.

So last fall I bought a vehicle - gasp!  However, not a daily driver, far from it.  I picked up an ancient RV and have had a blast using it to get out of the city on fun missions as well as used it during the cyclocross race season last fall.  99.9% of the time it sits quietly in the backyard patiently waiting for us to plan the next adventure and never is used in the city since it is a gashog and not the most comfortable thing to drive in the city.

Beyond that, life is still as it was - I enjoy riding everyday, my son loves cycling together on the cargo bike, and I am just as content as a year ago.  My health is getting better everyday due to the daily activity but also because I am choosing better foods to fuel myself, my bank account is very happy not dealing with car payments, gasoline purchases, etc and I still love breezing past those long lines of traffic.

Cycling everyday has reduced my stress levels so much that I do not think I want a car anymore.  I can afford it now and find a few cars very attractive (looking at you Fiat 500).  Aside from the cost associated with car ownership which I am not interested in taking on, I am also concerned about the effect on my contentment level, which is currently sky high.  The psychology of driving has been something that has been facinating me since I reduced so dramatically the kilometres I drive and I still to this day cannot figure out why so many people are ok with being so stressed out while behind the wheel.  I think people need to ride bikes more often to chill out.

I feel like I have been able to show some of my friends and customers that car ownership is not a requirement to live a fulfilling lifestyle in this city.  A handful of customers have told me that I have been able to inspire them to look at their own lives and reevaluate their notions of transportation - some have even ditched their second car.  One employee sold the last of their two cars and a close friend has also ditched their car.  Will you take the time to look in the mirror and see if you too can get by with one less car or no car at all?