Top Bike Stories for Calgary in 2013

2013 was another great year for cycling in Calgary.  The city has continued to see more people choosing to cycle more often, even in winter.  Although many wish the pace of bicycle infrastructure installation would move faster, myself included, we should consider 2013 another great leap forward for a more healthy, safe, and connected Calgary.

I have asked the #YYCBIKE Twitteratti to weigh in on their bike story moments from the last year - here are the responses and a few of ours (in no particular order):

1. The Calgary Parking Authority is planning on adding more bike parking spaces in the parkades they operate downtown.  This is welcomed news as there are not enough secure public bike parking spots downtown.


3.  The floods in June devastated the entire city and disrupted the lives, and livelihoods, of thousands of Calgarians.  Not only were roads and transit affected, the city's beloved pathway system took a very big hit.  3 bridges along the Elbow River as well as all the main bridges in Fish Creek Park were washed away making access by bicycle very difficult, or impossible, for thousands of Calgarians.

At this writing, all of the Elbow bridges are still out.  The bridges in Fish Creek have also yet to be repaired.


@BikeBikeYYC the flood - our poor pathways & bridges! Plus bikes came in handy after.
— Ryan (@carfreeyyc) December 28, 2013


4.  I was watching the final stage of the Tour de Alberta late at night, on a sofa in Amsterdam, stoked on the fact that the race went down the Crowbomb!  How cool is that?! Chapeau to all the Albertans that made the event so successful!


6.  There is something about a fun ride through the city, with a huge group of strangers, that just never gets old.  Many of the rides this year saw groups of 70+ - astonishing for us to contemplate.  Exciting to see so many new faces on bikes!

Raise your hand if you've seen a huge increase in the number of people winter cycling in your area over the last few years.


9. Calgary's very first physically separated cycletrack opened on 7 St SW.  While the usual "bikelash" type complaints were levelled against the new infrastructure, its hard to argue with the numbers of people who use it - 4x more than the city expected.  Here is a short video I took of the cycletrack on opening day.


10.  Which brings us to this - if bike lanes are so bad, where is the "bikelash"?  Besides the Calgary Sun ranting and raving that bikes are going to take away your liberty, force you to sell your car, and generally ruin your life, there has been veryu little negative blowback in Calgary regarding new bike lanes.  Personally, I think most Calgarians are reasonable people and as such, understand that making it easier for people to ride bikes in this city is nothing but a good thing.

With no car of my own, and none available to easily borrow I decided it was time to fire up the multimodel experience and head down to Fish Creek Park for some fatbiking on trails that, at least in summer, are super fun to explore.

With the West LRT line passing close by my house and the Ctrain network extending all the way down to Fish Creek I figured it would be an easy, relatively fast, and warm! option for getting down there and back without a car.

Temperatures when I was at the station waiting were around -11c with it forecast to drop a little throughout the day.  Total time to get from my front door to Canyon Meadows station (start of the ride) was a reasonable 45 minutes.

Fish Creek Park was also damaged in the June floods and as a result many of the designated mountain bike trails were impassable or simply gone altogether.  Navigating through the park to find the good trails was a little bit of guessing, remembering past rides, and blind luck.


At one point I found myself out on Fish Creek itself, riding along in a ski/snowshoe trough that seemed to have followed the entire length of the creek through the park - cool!  That was pretty unique but I wanted to find my way back into the forest singletracks that meander throughout the valley bottom so I veered off into the forest at my earliest opportunity.

I was able to find my way onto some great trails that had been snowshoed and walked on making for some very sweet ups and downs through the forest, plenty of open side slopes with amazing views, and even some deer sightings.

The trail network in the park is amazing!  I know people love riding the West Bragg Creek trails (45 min. drive west of Calgary) but I'd suggest giving Fish Creek a try if you haven't yet.  With trails running everywhere you could play in there for hours and have a blast, all within the city limits.  How cool is that?

2 hours later I was back on the train for the ride back to my little corner of the city.  By the time I was done the temperature had dropped a few degrees, I was completely soaked from the effort and glad to be relaxing for the ride home.

My only hiccup was on the trip back - I wish I had brought a fresh sweater to throw on under my jacket to keep the damp, chilliness away.  Nothing serious but I'll definitely remember for next time.


Staying warm is not as big a deal as many might think.  While riding in temperatures below -20c present bigger challenges, anything warmer than that doesn't require much in the way of special preparations.

For 0c down to about -15c most people will find that simply adding another layer to what they normally wear in cold weather is enough.  It goes without saying that good gloves, a scarf or neckwarmer, and warm headwear are mandatory in the wintertime.  It's very possible to be very comfortable in cold conditions - in fact, the biggest challenge is often over heating.


So without further adieu, below is what I was wearing on my "long way to work" fatbike ride today.  My ride took about 1-1/2 hrs and the temperature was a nippy -23c with not much wind.  I was chilly for about 5 minutes (Protip: this is what you want to aim for) but quickly warmed up.

Starting at the bottom and working up -

After arriving at work I simply peeled off the wool long john's and changed into my work shirt and shoes.

What do you find is the key to enjoyable winter cycling for you?
- December 19, 2013 No comments: Links to this post

The snow is here, the holiday season is in full swing, and gift giving and buying is about to go into high gear.  We are going to open before and after Christmas Day more hours than ever before to assist you with your bikey gift giving. 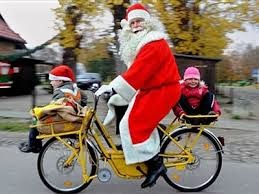 Our Holiday Season hours are as follows - 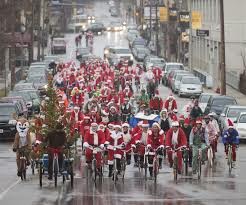 Please note we will also be closed from January 9th to 16th inclusive for our annual family ski holiday.