Brooks England is world-renowned for its incredible leather saddles, quality, style, and longevity.  They have been creating these masterpieces since 1878 and have amassed an army of devoted fans who appreciate the quality, comfort, and old-world charm that wafts from every Brooks product.

We are very proud to be selected as Alberta's first "Dealer of Excellence".

What wewill have in stock - 8 different saddle models including the B17, Colt, Imperial's, Aged, and Classic models.  We are also the only bike shop in Alberta that will have their incredibley beautiful and tough backpacks, sachels, and holdalls.  Plus, we have the full line of saddle bags and accessories - including toestraps, grips, bartape, mudflaps, Proofide - and wait for it - the Oxford Rain Cape!


With the holiday season just around the corner, consider the gift of style and durability for that special bike-person in your life - or perhaps yourself!  Brooks products are the perfect upgrade to your current cycle or project bike.  Come check out what handmade quality is all about.
- October 30, 2010 No comments: Links to this post

Email ThisBlogThis!Share to TwitterShare to FacebookShare to Pinterest
Labels: stuff we sell

Not only is he an amazing songwriter and musician - he loves bikes!

Email ThisBlogThis!Share to TwitterShare to FacebookShare to Pinterest
Labels: media

Airdrie Transit launched their new service this month for commuters looking for an option to leave their car at home, and by all accounts, this new service was welcomed by many people in both Airdrie and Calgary.  Of particular note for cyclists is that AT will have bike racks on these buses once spring arrives - however, in the meantime, they are allowing people to board this service WITH THEIR BIKES.  Here is a Twitter conversation between me and Airdrie's Transit Coordinator -

@ThumbTaks Any idea if the ICE service will have bike racks on buses? Some customers have asked.

@bikebikeyyc Transit Coordinator for #Airdrie Transit here...we've removed the bike racks for the season. Back in the spring

@ThumbTaks - Wow! Awsome! Will be sure to promote that service. Bike commuters thank you! #carfree #yyc #airdrie

@bikebikeyyc Yes, our fleet to #yyc will have bike racks back in the spring. In the meantime riders are permitted to board with their bikes

On the other hand, Calgary Transit has done a mediocre job of showing leadership with regards to integrating bikes and transit.  Right now, CT shows 3 routes that are supposed to have bike racks on ALL buses on these routes.  Unfortunately, this does not seem to be the case (customers who use these routes have told us), and CT's response to complaints about their inability to insure all buses on these 3 routes have racks has been the same answer - "we cannot guarantee that the buses leaving the garage for certain routes will have racks".

What's the point then of promoting it?  Why can't Calgary Transit have bikes on all buses like other cities?

Kudo's to CT are deserved however for cyclists ability to bring bikes on the C-Train for sure, but to be fair, it's not always easy to get on or off the trains due to the narrow doors and many trains have a pole right in the middle of the doorway making it really tough to use the train if you have wide bars or panniers on your bike.  Also, bikes are not allowed on the trains during rush hour (exactly the time you need to be able to make the biggest impact) - the ICE service however does allow bikes onboard anytime.

Congratulations Airdrie Transit on showing amazing leadership on integrating alternative modes of transportation.
- October 24, 2010 No comments: Links to this post

We are very excited and pleased to be Calgary's exclusive dealer for two cool bike brands - one is very new, one is very old.  Say hello to LINUS and Raleigh!

First, lets talk about LINUS.  Based in Venice Beach, California, LINUS arrived on the scene just last year and in that short time, has received a ton of positive press about both their designs and ride quality.  I think you'll agree, LINUS bikes are very classic looking, chic, perhaps even fashionable - with a ride quality that is both comfortable and nimble.

The 2011 lineup includes the Roadster's and Dutchi's in singleseed, 3-speed, and 8-speed options as well as two "retro" styled bikes - the Gaston and Dover - with 5-speed internal gearing with downtube shifter.  The Mixte model is available in 3-speed and a new 8-speed version too.

Delivery of these fine bicycles is still a little ways off - perhaps March 2011- but we are so pleased to add them to our lineup we just had to tell you now!


Since we opened the shop in February 2010, we have had many customers bringing in their old Raleigh bikes for service and upgrades and have been touched by the passion that these customers have for their old bikes.

Generally speaking, these customers !adore! their Raleigh bikes and will do whatever is necessary to keep them rolling.  In all honesty, that passion for this grand old bike brand was probably the biggest reason why we wanted to offer them.  Well, that, and the fact that their city bikes are really nice looking and offer a ton of value.

We will be offering two models to start - the Sprite ($350) and the Roadster ($550).  The Sprite is their entry-level city bike with full fenders, 3-speed internal gearing, and classic city bike design - available in both classic frame and step-throughs.  (Oh, did I mention its is actually made in Canada?)  The Roadster is another full-fendered city bike, but with an 8-speed derailleur setup - offering a wider gear range and more versatility.  The Roadster is also available in classic and stepthrough frames. 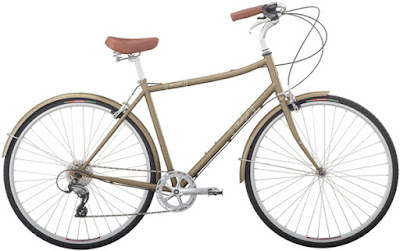 We will also have access to the other cool bikes in Raleigh's lineup like the Alley Way, One Way, Clubman, and Sojourn.

We are expecting our first shipment of Roadsters this week and Sprite's around Christmas time.

Email ThisBlogThis!Share to TwitterShare to FacebookShare to Pinterest
Labels: stuff we sell


Much has been said and written about this notorious intersection here in Calgary - mostly because it is a choke point for traffic and has been, until recently, the last stoplight on Glenmore Trail causing massive traffic headaches. From a cyclist point of view, this area was pretty scary and needed help. It is a very popular route for getting south towards the Weaselhead area (and even further south towards Fish Creek) and is also the northern route for cyclists heading towards Edworthy Park, the Bow River Pathway, and downtown. Bike route signage was spotty at best, useless at worst.

There was much specualtion that the Ring Road would eventually go through this area but the Tsu Tina Nation, the Province, and the City could not come to an agreement on the SW section of the Ring Road, leaving this intersection as a huge traffic problem that needed some improvements fast. The City has since changed the whole intersection - removing the traffic lights, installing roundabouts on the north and south side of Glenmore, and building a bridge connecting the 2 roundabouts. Also included was a pathway connecting the north and south to MRC and Lincoln Way SW.


Overall, and considering the limitations that were in place (neighbouring homes), I think the city has done a good job of providing for bicycle access through this area and, in fact, offering a safer alternative to getting across Glenmore Trail than existed before. Signage is currently non-existent but, to be fair, the project appears to still be months away from completion. Previously, if you were cycling, you had to choose between "the lesser of 2 evils" - ride the road with aggressive, speeding motorists who were rushing to get on/off Glenmore Trail or 37 Street - OR - ride on the sidewalk. If you are cycling with children, the road is not an option, leaving the sidewalk, and the sidewalk is only on the east side of 37 St Sw with crappy connections everywhere.

Now, there is a much safer route. Here is my personal favorite:
- approaching from the north, ride north on Sarcee Rd SW (29 st sw turns into Sarcee Rd at 33 St Sw) till you get to the intersection of Sarcee Rd and Richardson Rd SW
- proceed straight through the intersection, with the road now being Lincoln Way SW. Follow it around until you see the new bridge over Glenmore Trail
- take the pathway up and over the bridge
- at Lakeview Dr SW you can cross 37 St SW and proceed south towards Weaselhead on a pretty safe road

This new link is by no means perfect - especially for pedestrians (adds at least 250m to cross Glenmore) - but it is a start. It would also be useful if bikeway signs are moved/replaced/added/changed to reflect the new route possibilities through Lincoln Way, MRC, and along the sidewalk on the east side of 37 St SW.

Thank you City of Calgary for ensuring there is ped/bike access through this vital area.
- October 04, 2010 No comments: Links to this post

Email ThisBlogThis!Share to TwitterShare to FacebookShare to Pinterest
Labels: advocacy 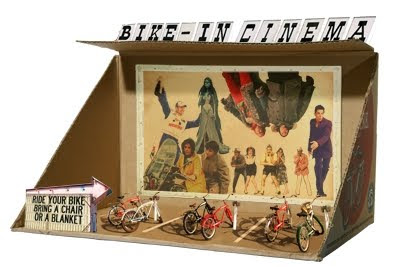 We are very excited to announce some bikefun happening over the winter months - Movie Night at BikeBike!

What is Movie Night at BikeBike?

Basically, we will clear out the shop and setup as a mini-theatre complete with popcorn.  All you need to do is show up with a chair or pillow and a donation to the Calgary Food Bank.  Cash and non-perishable food items will be accepted, so please give generously to Calgary's less fortunate families.

We have 6 dates lined up from October to March, with 6 different bike-themed films to keep your fire for bikes burning throughout the wintertime.  Here is the tenative line-up...

Please help us help our fellow Calgarians, and stoke your bikelove at the same time!
- October 01, 2010 No comments: Links to this post