Every Journey Starts With One Step


September 17, 2008 - little did I know that this day would change the way I live my life and start me on the path that led to creating BikeBike Inc.

A brief history - before creating BikeBike I was working from home as a sales rep in the bike/sporting goods business for the better part of 12 years.  I drove on average between 40,000-50,000 kms per year all over the prairie provinces of Canada alone in my minivan and flew across North American 3-4 times per year.  I loved the job but there was one thing that kept on nagging at me - like a splinter you cannot get out -
I hated the fact that I spent so much time in my vehicle and felt guilty for driving alone most of the time.

I was spending a lot of time reading about the ecological consequences of our society's driving habits and peak oil theory had just popped onto my radar - remember when oil had hit $147/barrel that year?  I wanted to find away to alleviate my guilt, and perhaps, reduce my own personal impact on the enviroment, even just a little.  Saving money was not really a consideration.

Then I read about a new product that piqued my interest - the Xtracycle Freeradical.

"Self, why not get one of these contraptions and use it for groceries".
Self replied - "Sounds like a good idea.  The grocery store is only 5 blocks away - it will be easy, even in crappy weather".
So I say to Self - "Ok, lets try.  Its not expensive, I have a bike I can put it on, perhaps it will be fun to go shopping by bike".

So, as luck would have it, I ended up finding one at a local shop that was shutting down, and a day or two later the "Tankbike" was born.  It was easily the heaviest bike I had ever owned - tipping the scales at 55lbs - however it quickly became the bike I wanted to ride everywhere.  Heavy?  So what.  Terrible brakes?  Who cares.  It was fun to ride - kind of like the bike equivalent of a bus.  Everywhere I rode it people would ask questions.  All my friends wanted to try it.  Many laughed at its weight and mish-mash of components.  The best part was I could now ride anywhere with my son (and frequently his bike too) and trips to the farmers market, grocery store, everywhere really, became an adventure.

Suddenly I became part of this subculture in the bike world - a cargobike owner.  I showed it to all my bike shop friends who I knew were into kooky bikes.  They thought I was a kook.  Perfect!  More importantly, owning the Tankbike got me into researching what other cargo bikes were out there - and by extention, what was going on in a macro sense in the cargo bike/utility cycling world. 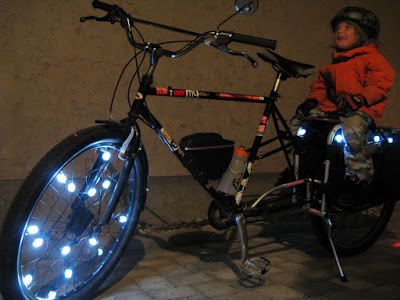 What I found was that this category of bike and the shops that were carrying them were experiencing explosive growth in their respective markets.  It didn't matter if the shop was in New York or Vancouver, Toronto or San Diego.  It was growing everywhere - yet here in Calgary the existing bike retailers were mostly oblivious to the possibilities that these bikes could offer.

So, Self says to me - "You've always dreamed of owning a bike shop, why not open a utility bike shop in Calgary"?
My response to Self was - "Hmmm - you might be onto something".
Self then says - "It'll work!  Think about how your life has changed for the positive since you got Tankbike.  Don't you think others would want that sort of change in their life"?
My response to Self was again - "Hmmm - maybe".

Well, the result of that conversation is pretty obvious by now.  BikeBike is now a part of the cycling landscape in Calgary and our customers are telling us their own stories of how their new utiltiy/city/cargo bikes are positively impacting their lives.  We could not be happier and are constantly being inspired by them to continue to spread the message that city/utility/cargo bikes offer:

You too can make a positive impact on your life and community.  All it requires is one small step.  Set a goal of using your bike once a week for, well, anything.  Groceries?  Sure.  Errands?  Sure.  Anything really, it doesn't matter.  What matters is the commitment to try - simply try to ride more often.