Respect on the Roads 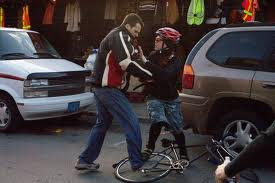 I had an interesting conversation with a fellow at the shop yesterday that I have to share - mostly because his attitude about cyclists on the roads bothered me for the rest of the day.

Man - Why do cyclists ride in the middle of the lane on 4 St SW?
Me - Well, first, because cyclists are allowed to use the full lane under the HTA, and second, because the lanes are narrow on that road making it unsafe for a car to pass a cyclist in the same lane.
Man - Why don't they instead ride on 2 St SW, there is a bike lane over there.
Me - My guess is many don't ride there because that road doesn't take them where they need to go. 2 St does not go into the core, 4 St does.
Man - Why do cyclists always insist on riding past all the stopped cars at lights? When they do that I get very frustrated because I have to repass them again and again and it slows down traffic.
Me - Well, sir, that is one of the advantages of cycling is that you can filter past long rows of cars in heavy traffic. Do you get frustrated when repassing the same cars in traffic?
Man - But when cyclists do that they slow down traffic.
Me - Bikes do not slow down traffic sir, traffic slows down traffic.
Man - Bikers need to show more respect, by doing that they disrespect drivers and that makes us frustrated and angry. (A female customer in the shop is quietly listening to our conversation and at this point she starts to bristle...)
Me - Sir, if you want to talk about respect I think you need to realize that when a cyclist "disrespects" you all that can happen is that you get upset. When a driver "disrespects" a cyclist they can potentially kill them or seriously injure them, depending on what they do. There is a big difference.
Man - (starting to visually upset that I am confronting him) Well, I think that cyclists need to ride more safely. It's dangerous out there, that's why I drive to work instead of cycling.
Me - You know, if you cycled to work more often you would help make the streets safer for everyone, drivers too. You would also have a better understanding of what it's like for cyclists and perhaps have more empathy for your fellow citizens who cycle.
Man - I don't think so.
Me - Exactly.

(Then he leaves the shop with his wife, who I have to say, was supporting my arguements)

After he left, a female customer who was listening to the exchange pipes up that she wanted to jump on him at his "respect" comments - "He should have seen the so-called respect I was given yesterday by a driver who squeezed me off the road."

Normally I try to avoid those sorts of conversations with customers that are in the shop because I do not want them to feel uncomfortable about our shop but part of me is wondering if that's a good idea. That part of me feels that those sorts of attitudes need to be confronted head on with the hope that perhaps I can help them have a different perspective on cyclists.

This fellows attitude seems to be very common here in Calgary and I am loathe to let it go unchallenged.

Have you had a similar conversation with a non-cyclist lately? Do you avoid challenging these kinds of attitudes or face them head on?
- September 18, 2011

Email ThisBlogThis!Share to TwitterShare to FacebookShare to Pinterest
Labels: rant