Fans of the WID Canal (Western Irrigation District) pathway to Chestermere will likely understand why we were intrigued by the idea of riding more of Alberta's canals: It's peaceful, completely car free, often people free, with wide open views of this beautiful part of Alberta.

One of the interesting parts of the canal system is that it follows a "lay of the land" route instead of the monotonous range/township grid offering an ever-changing view ahead which makes riding out on the Prairie a little less boring.

After some digging in the 'ol intranetwebs this past winter, I found a map of all of the irrigation canals in Southern Alberta and very quickly began linking together some of these canals with those boring rural roads to try and create a route that was available earlier in the season than mountain routes, would be safe and easy for new bikepackers, and explore a part of Alberta often forgotten about. 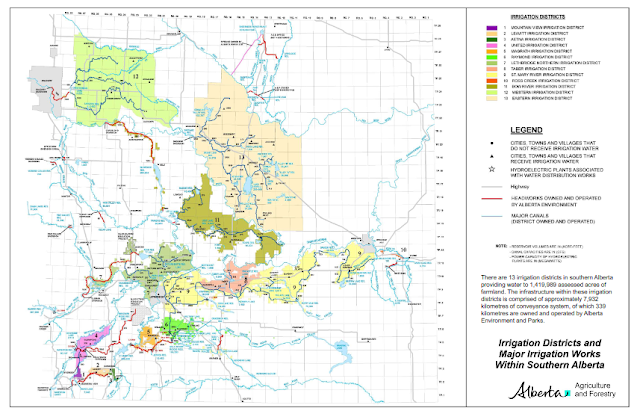 We designed this route to use as many of the "in good condition" canal sections as possible, linking them together with quiet gravel roads, and avoiding the need to climb over locked gates. We wanted there to be some resupply options along the way and were hoping to extend this route further southeast making into a week-long adventure at some point in the future. And due to the route rolling east, daily elevation gain is almost nothing - meaning this route should be a good intro to newbies to multi-day bikepacking. Be aware there are no services or bathrooms outside of Chestermere, Carseland, and Milo.

The route is broken up into 3 distinct segments:

Calgary to Chestermere follows the still-somewhat-unknown paved canal path that starts at the Bow River Weir near our shop and runs all the way to Chestermere Lake. Be aware there is no camping along the way and no camping in Chestermere proper - good opportunity to practice your best #banditcamping style and leave no trace. All services here.

Chestermere to WCPP picks up right at the south end of the lake and is gravel all day. 2-track gravel canal roads for about half the day and gravel rural roads the other half - with about 5kms of not-at-all-fun and kind of scary Highway 24 from the town of Carseland down to WCPP. Make sure you've got a bright tail light on super flash for added safety. Small food store, old tavern, and liquor store here.

WCPP to Milo is all gravel road, the first half being the most interesting as it skirts along a ridge above the Bow River and Sitsika lands. The second half of this day is mostly farmlands and about 3kms of paved highway into Milo. Camping is available at Lake McGregor which is right beside Milo. Liquor store, nice grocery store, cafe, and saloon here - with rooms to rent!

Once in Milo you have a couple of options: Turn around and ride home or do what we did and get picked up by someone that loves you.

Alternately, you could drive to Milo, park in town, ride to WCPP, stay the night, ride back to your car the next day. This is a plan we're aiming for this summer too.

Bike Recommendation: I rode a 29x2.2 Velo Orange Piolet, Brother Jesse was on a 27.5x2.8 Brodie Torque, Connoir rode a 700x43 Surly Straggler, and Krockstarr was on his trusty 29x2.0 Salsa Cutthroat.

Any gravel bike or bikepacking designed bike would do the trick with a minimum tire width recommendation of 40mm.

Leave us a comment if you have any questions and let us know if you've ridden out this way.

Love these rides and potential for even more! keep 'em coming.